Two teams looking to continue their perfect start to the UEFA Champions League group stage will clash at the Allianz Arena on Wednesday, September 14, 2022. 02:00 CEST. when Bayern Munich host Barcelona.
Bayern Munich won their Champions League group stage opener 2-0 at the Stadio Giuseppe Meazza against Internazionale. Leroy Sane scores the winning goal. They are unbeaten in their last 11 matches in all competitions (W6 D5 L0) ahead of the clash against Barcelona.
Barcelona won their opening Champions League group stage match, beating Viktoria Plzen 5-1 at home. Robert Lewandowski caught the eye with three goals. Going into Wednesday's match, they are unbeaten in their last eight matches in all competitions (W7 D1 L0).
Barcelona and Bayern München are first and second in the group, each with three points. Elsewhere in the group, Internazionale sits third with zero points.
Viktoria Plzen is fourth with zero points. When the two teams last met in action, Bayern Munich won 3-0 in their Champions League group stage match at the Allianz Arena last season.
Thomas Muller scored the first goal for Bayern in the 34th minute. Leroy Sane and Jamal Musala also scored. Bayern München has beaten Barcelona of late with a win in three games in a row, since August 2020.
Bayern has beaten Barca 14-2 during their winning streak. With a hat-trick against Viktoria Plzen, Lewandowski is Barcelona's top scorer in the Champions League.
Sane led Bayern München in the Champions League scoring after scoring in their opener against Internazionale.
The hosts have scored in each of their last 16 matches in all competitions. They have scored in every game since their Champions League encounter with Villarreal in April. 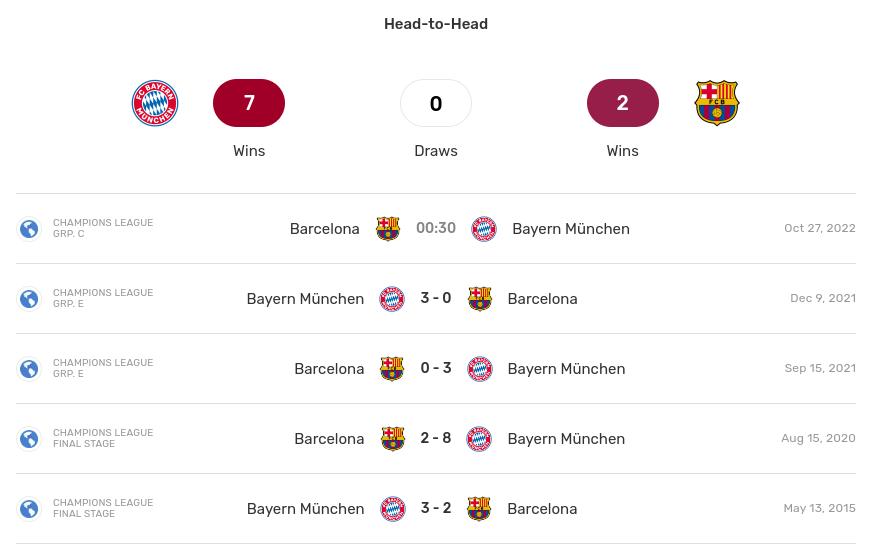