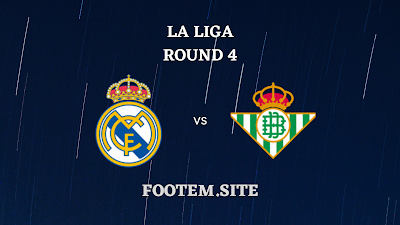 Something must be given on Saturday 03 September 2022. at 7:45 p.m. IST. at the Estadio Santiago Bernabeu as champions, Real Madrid and Real Betis both staked their 100% win at the start of the Primera Division season at stake.
Hosts Real Madrid sits top of the table with nine points, level on points with Real Betis through three games.
Real Madrid won their last Primera Division game 3-1 at the RCDE Stadium against Espanyol, extending their winning streak to three.
Real Betis ' last league game saw them win 1-0 at home to Osasuna, their third successive win. The last time these two teams met in a Primera Division match, they drew 0-0 at the Estadio Santiago Bernabeu in 2021/2022.
Real Madrid has beaten Betis of late, unbeaten in their last four matches in the Primera Division (W2 D2 L0).
Betis are looking for their first league win in a match between the two clubs since March 2020.
Los Blancos have beaten Los Verdiblancos 4-2 during their unbeaten run. In 2022/2023, Real Madrid was led by Karim Benzema. The striker is the club's top scorer with three goals and is third on the league's scoring charts.
one of them became the first critical goal of the match. Borja Iglesias has been the main attacking threat for Betis, scoring four goals, including the game's opening three. He is tied at the top of the scoring charts in the competition in 2022/2023.
Real Madrid is yet to play at home. At home last season, they recorded 13 wins, five draws and one loss in 19 Primera Division matches.
Betis won in their only previous league game away from home this season.
Los Verdiblancos are currently on a seven-match unbeaten run (W3 D4 L0). They haven't been beaten since February 27 against Sevilla. In three league games this season, both clubs have won three.
Next Post Previous Post
La Liga