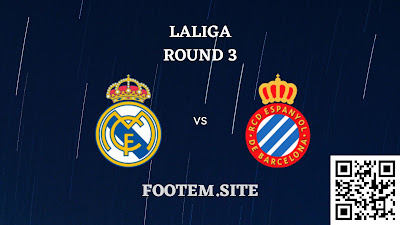 Real Madrid will be looking for a three-game winning streak at the start of the 2022-2023 La Liga campaign when they head to the RCDE Stadium on Monday 29 August 2022 at 03:00 CET to face Espanyol.
Los Blancos have beaten Almeria and Celta Vigo in their first two matches of the season.
While Espanyol has only picked up one point from their two matches with Celta and Rayo Vallecano.
Espanyol was relegated miraculously from the Spanish top flight in 2019-20, but they returned to the top level on the first request by winning the Segunda Division, and the Team finished 14th in La Liga last season.
The White and Blues are just four points outside the relegation zone in 2021-2022, and there is no doubt that the supporters will demand an improvement this season.
Now under the management of former Osasuna and Granada's head coach Diego Matinez, Espanyol started their La Liga season with a 2-2 draw at Celta, but they were unable to build on any welcome points away, suffering a 2-0 home loss to Rayo Vallecano last time out.
Real Madrid, meanwhile, is enjoying a great 2021-2022 season, winning La Liga, the Champions League, and the Spanish Super Cup, and the challenge is for them to back it up this season.
Carlo Ancelotti's side faced a tough test from newly promoted Almeria on the opening weekend of the new La Liga season but managed to win 2-1.
The reigning champions were in superb form ci Celta last weekend, meanwhile, recorded a 4-1 win, with Karim Benzema, Luka Modric, Vinicius Junior, and Federico Valverde on the scoresheet, and two wins have left them in second place in the table. behind Villarreal.
Real Madrid will be aware of the challenges they face this season in the form of Barcelona, ​​who have had a spectacular summer transfer window, but Ancelotti's side are believed to be not planning anything dramatic at the end of the market despite allowing Casemiro to move to Manchester United.
Next Post Previous Post
La Liga